There really aren't that many rules to follow in my school and in my library, but whenever I do try to enforce the rules, 95% of the students talk back and/or try to negotiate with me.

One of the main rules in the library is basically that students are here to work, quietly, and to stick to their own tables and keep the conversation at a low volume. We tend to have classes held in here a fair amount, and students are supposed to use the library to study, so we try to keep the noise level down and productivity up. If there are four chairs at a table, there had better be only four people at that table, and all of them sitting down. The numbers go up, or they're standing up, the volume goes up. Same thing if they're leaning across tables or calling over to another table.

I'm not a shusher, but I've got a few standard lines. One of my most repeated ones is, "Guys [yes, I use "guys" with a mixed group, sue me], four to a table," and I'm looking at the kid who is at the next table but has the chair turned around to talk--the fifth person.

"I'm at this table," the kid will respond, pointing to the table he just had his back to--that's their standard line.

Do I look stupid? I worked for lawyers for over six years. I have a Master's degree, and my undergrad is in English Lit--you know, words. I know trying to get by on the letter of the law when I see it, and I don't have to put up with it.

My favorite one today was when I asked a guy hovering over another girl's computer to take a seat and he told me, "I'm just getting the assignment from her." I said, Fine, just do it quickly and move along"--but then he added, "We're going out."

Either I'm getting cynical or I was so tickled by his excuse. . . I cracked up. "That's not much of an excuse for anything," I told him. And I left the supercouple to their work. I honestly don't know what he expected me to accommodate in light of their, uh, relationship. When I told one of my co-workers, she cracked up and said, "Maybe they got really serious this weekend or something and it's a big deal to them." Hee.

But man, am I sick of the talking back.

So today when I got one of those stock responses from an upperclassman who was carrying on an extended conversation with other students who were supposed to be working at the computers, I didn't put up with it. Oh, I didn't yell or take names.

No, I scoffed at the tired old line he was throwing at me.

"Is that all you can say?" I said. "If I had a dime for every time someone has said that to me. . . man, you guys have got to start getting more creative. I'm kinda disappointed."

In case you couldn't tell, I work in a community where a majority of the kids are well off. They've gotten everything they ever wanted and many of them are, to be blunt, spoiled--not refused anything, or their parents treat them like equals and let them negotiate all the time. Which they can do fairly well because they also are smart--and I love that about them. So hence the disappointment when they resort to the same old stuff.

After my response, the kid was speechless.

Rite of Leaving Behind, Part I 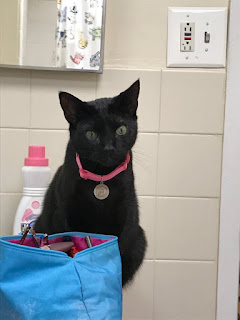 An Attempt to Explain the Past Couple Months